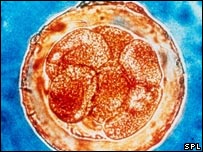 Scientists say such research is essential


Regulators are due to make a decision whether to allow human-animal embryos to be created and used for research.
The Human Fertilisation and Embryology Authority is expected to give the plan the go-ahead in principle - but each case will still be judged individually.

An HFEA consultation showed the public were "at ease" with the idea when told it could pave the way for therapies for conditions such as Alzheimer's disease.

But a leading opponent said many people would be "horrified" by such a move.

No good reasons for banning this research have been identified

Scientists want to create hybrid embryos by merging human cells with animal eggs in a bid to extract stem cells.

The cells form the basic building blocks of the body and have the potential to become any tissue, making them essential for research.

At the moment, scientists have to rely on human eggs left over from fertility treatment, but they are in short supply and are not always good quality.

Two teams from Kings College London and Newcastle University have already applied to the HFEA to use hybrid embryos.

If the HFEA does agree human-animal embryo research can go ahead, there would be individual hearings for these two applications, probably in November.

Dr Lyle Armstrong, of Newcastle University, said: "It does seem a little abhorrent at first analysis, but you have to understand we are using very, very little information from the cow in order to do this reprogramming idea. "It's not our intention to create any bizarre cow-human hybrid, we want to use those cells to understand how to make human stem cells better."

The embryo is deprived not only of its life, but of any human parents

And Lib Dem MP Dr Evan Harris, a member of the House of Commons science and technology committee which has already called for such research to be allowed, said: "No good reasons for banning this research have been identified.

"The HFEA must now clear the way for their research licence committee to grant permission for some of our top scientists to continue their world-leading medical research using hybrid embryos."

The HFEA decision comes amid government moves to lay down regulations covering such research - the law governing embryo research is out of date and does not cover the issue.

The government originally proposed banning the technique in a White Paper, but reversed its decision this year in a bill which proposed allowing hybrid embryos which were 99.9% human and 0.1% animal, following a backlash by scientists and patient groups.

But the HFEA has carried out its own review ahead of parliament passing the legislation so as not to hold back research.

The regulator can grant licences to scientists to pursue such research, but would then have to change its criteria if future rules contradicted its own practices.

Dr Helen Watt, from the Linacre Centre for Healthcare Ethics, said the technique was "a further violation of the rights of the embryo".

"The embryo is deprived not only of its life in the course of the experiment, but of any human parents," she said.

"It is further dehumanised by the very method of its creation."

And Josephine Quintavalle, of the campaign group Comment on Reproductive Ethics, said the HFEA was wrong to be pushing ahead with a decision which should be left to parliament.

"Using hybrid embryos has never been acceptable - it offends the dignity of humans and animals.

"Many people will be horrified if this is allowed."

But Parkinson's sufferer Frank Brooks backed the use of hybrid embryos in the search to find a cure for the disease.

"It would be an enormous benefit if that cure was developed to the people who are young enough to benefit from it, because it's going to be a few years before it's here," Mr Brooks said.

"But if we don't start now we're never going to get there."