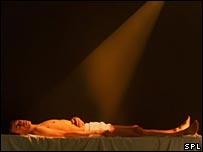 The visual illusion plus the feel of their real bodies being touched made volunteers sense that they had moved outside of their physical bodies.

The researchers say their findings could have practical applications, such as helping take video games to the next level of virtuality so the players feel as if they are actually inside the game.

Clinically, surgeons might also be able to perform operations on patients thousands of miles away by controlling a robotic virtual self.

For some, out-of-body experiences or OBEs occurs spontaneously, while for others it is linked to dangerous circumstances, a near-death experience, a dream-like state or use of alcohol or drugs.

We feel that our self is located where the eyes are

One theory is that it is down to how people perceive their own body - those unhappy or less in touch with their body are more likely to have an OBE.

But the two teams, from University College London, UK, and the Swiss Federal Institute of Technology in Lausanne, believe there is a neurological explanation.

Their work suggests a disconnection between the brain circuits that process visual and touch sensory information may thus be responsible for some OBEs.

In the Swiss experiments, the researchers asked volunteers to stand in front of a camera while wearing video-display goggles.

Through these goggles, the volunteers could see a camera view of their own back - a three-dimensional "virtual own body" that appeared to be standing in front of them.

When the researchers stroked the back of the volunteer with a pen, the volunteer could see their virtual back being stroked either simultaneously or with a time lag.

The volunteers reported that the sensation seemed to be caused by the pen on their virtual back, rather than their real back, making them feel as if the virtual body was their own rather than a hologram.

Even when the camera was switched to film the back of a mannequin being stroked rather than their own back, the volunteers still reported feeling as if the virtual mannequin body was their own.

And when the researchers switched off the goggles, guided the volunteers back a few paces, and then asked them to walk back to where they had been standing, the volunteers overshot the target, returning nearer to the position of their "virtual self".

Dr Henrik Ehrsson, who led the UCL research, used a similar set-up in his tests and found volunteers had a physiological response - increased skin sweating - when they felt their virtual self was being threatened - appearing to be hit with a hammer.

Dr Ehrsson said: "This experiment suggests that the first-person visual perspective is critically important for the in-body experience. In other words, we feel that our self is located where the eyes are."

Dr Susan Blackmore, psychologist and visiting lecturer at the University of the West of England, said: "This has at last brought OBEs into the lab and tested one of the main theories of how they occur.

"Scientists have long suspected that the clue to these extraordinary, and sometimes life-changing, experiences lies in disrupting our normal illusion of being a self behind our eyes, and replacing it with a new viewpoint from above or behind."
Top
Post Reply
1 post • Page 1 of 1