Impacts have been a major feature of Solar System evolution
It is a commonly held belief that Jupiter shields Earth from comets or asteroids that might otherwise hit us.

This idea is based on a 1994 study that looked at comets originating from outside our Solar System. 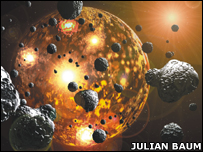 New research, presented at the European Planetary Science Congress, has looked at the effect of Jupiter on comets already within our Solar System.

It seems that, whilst Jupiter does deflect some comets away from us, it sends almost as many comets towards us.

The recent Open University study has focussed on a population of comets called Centaurs that orbit between Jupiter and Neptune.

The majority of objects that threaten the Earth, termed Near Earth Objects, come from these Centaurs or from the asteroid belt found between Mars and Jupiter.

Dr Jonathan Horner, with Professor Barrie Jones, has designed a computer model that tracked the paths of 100,000 Centaurs, over 10 million years, and recorded the number of objects that would impact the Earth.

Five scenarios were run, the first with our Solar System, then replacing Jupiter with a planet that was three-quarters, a half and a quarter of the mass of the gas giant; and finally with no Jupiter at all.

The results showed that the numbers of Earth impact events were the same for the cases with the real Jupiter and with no planet at all.

Although the data shows that Jupiter does deflect some objects that would otherwise threaten the Earth, its large mass also redirects bodies towards the Earth.

"Rather than it being a clear cut case that Jupiter acts as a shield, it seems that Jupiter almost gives with one hand and takes away with the other," said Dr Horner.

One unexpected outcome of the work showed that if we had a planet the size of Saturn in Jupiter's place, the number of Earth impacts would be significantly increased. A smaller planet would still divert comets towards the Earth, but would not have the bulk to send dangerous objects out of the Solar System.

"There was some degree of surprise in the results," said Dr Horner. "We had a feeling it wouldn't be as clear cut as everybody believed, as not having a Jupiter should be quite a stable situation because you've got nothing stirring things up.

"We didn't expect to see this big peak of impact rates if Jupiter were the size of Saturn."

This preliminary data has been presented to the European Planetary Science Congress in Potsdam, Germany. The team is currently running five additional simulations to learn more about the effects of a Saturn-sized planet.

The next phase of the project for the group is to assess the impact risk posed to the Earth by objects in the asteroid belt and the team will go on to study comets that venture into the Solar System from deeper out in space.
Top
Post Reply
1 post • Page 1 of 1